Although Medicaid and Medicare are both public health insurance programs, they have essential differences.

Medicare is a federal program for older adults, people with disabilities, and individuals with end-stage renal failure. Medicaid is federal-state assistance for those with limited incomes.

History of Medicaid and Medicare

Roles of States and the Federal Government

The states and federal government play different roles in administering Medicare and Medicaid, according to the U.S. Department of Health and Human Services.

Medicare is a federal program that the Centers for Medicare & Medicaid Services runs, so it is consistent across states.

Generally, after paying income taxes for 10 years, a person and their spouse can enroll in Medicare upon turning 65.

Qualifying individuals with disabilities do not have to wait until retirement age to enroll in Medicare. For example, people eligible for Social Security Disability Insurance can also receive Medicare after a two-year waiting period. Those with end-stage renal disease can obtain Medicare at any age if they, their spouse, or their parent if they are a dependent child, have worked the required amount.

Medicaid primarily benefits people with limited earnings. As states run Medicaid, the enrollment requirements can vary by state. At Joseph L. Motta co. we are dedicated to helping educate you concerning Medicaid’s financial restrictions, and help you appreciate the importance of proper planning. Contact us for a free initial consultation for Medicaid Planning

There are multiple pathways to Medicaid, as the Kaiser Family Foundation explains. States must allow low-income parents, children, and those who are pregnant to qualify for Medicaid if their income falls below a certain threshold. This threshold is calculated using the Modified Adjusted Gross Income (MAGI) financial method. Those who received foster care as children can get Medicaid regardless of income.

The basis for eligibility can stem from enrollment in other programs, such as Supplemental Security Income or the Breast and Cervical Cancer Treatment and Prevention Program. States can also allow older people and individuals with disabilities to qualify for Medicaid, imposing both income and asset limits.

While Medicare covers hospitalizations, short-term care in a skilled nursing facility, and hospice care, it does not fund long-term care. Medicaid covers long-term care in nursing homes, according to the American Council on Aging.

Some older adults can enroll in both Medicare and Medicaid for greater coverage of their health care needs. For instance, one might have Medicare covering hospitalizations and Medicaid covering long-term care. We can help you navigate and plan for long term care.

At Joseph L. Motta Co., we pride ourselves in our expertise of elder law and Medicaid planning. From our local office in Avon Lake, OH, we help our clients to leave a legacy, not a predicament. Let us help you review  your power of attorney and other estate planning documents. We'll make sure the comprehensive durable power of attorney is sufficient for Medicaid planning purposes and discuss some methods for preserving assets for the community spouse should the other spouse need the assistance of Medicaid to pay for the costs of nursing home expenses. Please call our office at 440-930-2826 to schedule a free consultation . 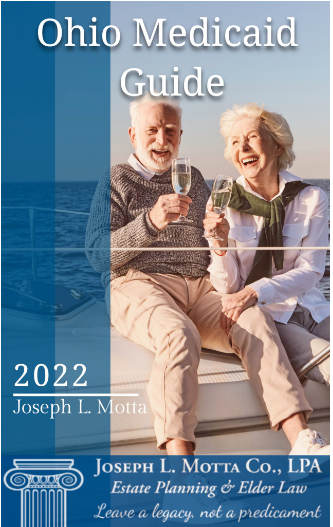 What You Should Know About Required Minimum Distribution

Three Tips When Including Caregivers in Your Estate Planning

Will Medicare Cover The Costs of Assisted Living?

Choosing The Best Home Care Provider For Your Parents