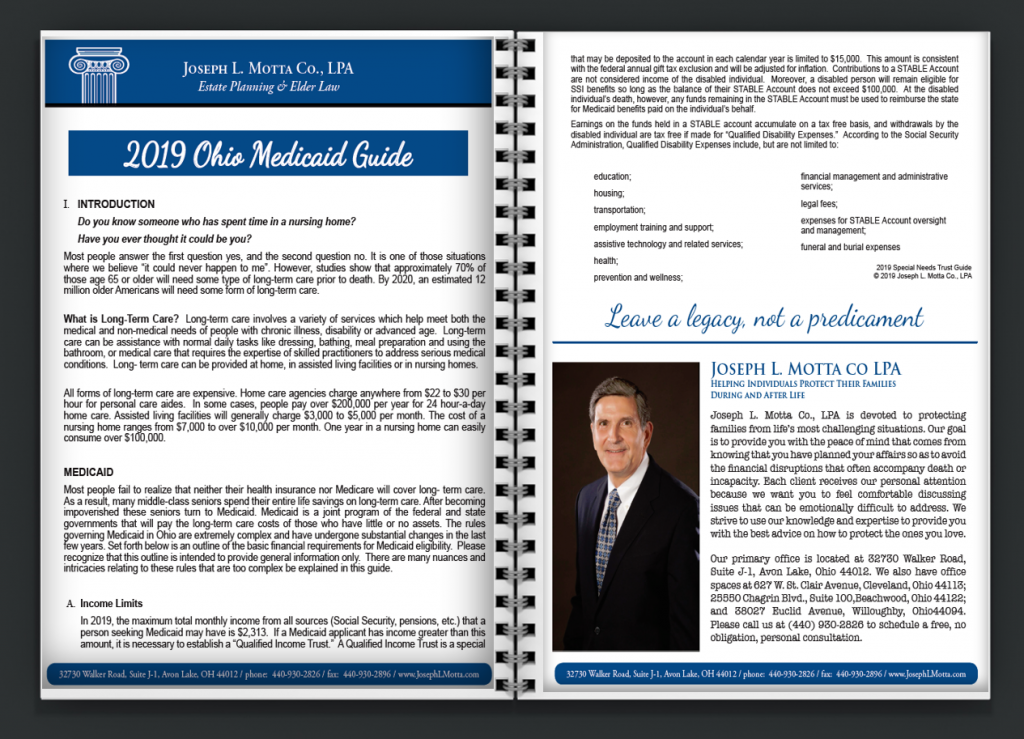 I. Introduction to Medicaid Guide

Do you know someone who has spent time in a nursing home? Have you ever thought it could be you?

What is Long-Term Care?

Long-term care involves a variety of services which help meet both the medical and non-medical needs of people with chronic illness, disability or advanced age. Long-term care can be assistance with normal daily tasks like dressing, bathing, meal preparation and using the bathroom, or medical care that requires the expertise of skilled practitioners to address serious medical conditions. Long- term care can be provided at home, in assisted living facilities or in nursing homes.

Most people fail to realize that neither their health insurance nor Medicare will cover long-term care. As a result, many middle-class seniors spend their entire life savings on long-term care. After becoming impoverished these seniors turn to Medicaid. Medicaid is a joint program of the federal and state governments that will pay the long-term care costs of those who have little or no assets. The rules governing Medicaid in Ohio are extremely complex and have undergone substantial changes in the last few years. Set forth below is an outline of the basic financial requirements for Medicaid eligibility. Please recognize that this outline is intended to provide general information only. There are many nuances and intricacies relating to these rules that are too complex be explained in this guide.

In 2019, the maximum total monthly income from all sources (Social Security, pensions, etc.) that a person seeking Medicaid may have is $2,313. If a Medicaid applicant has income greater than this amount, it is necessary to establish a “Qualified Income Trust.” A Qualified Income Trust is a special kind of legal instrument used for Medicaid eligibility purposes. Any income over the $2,313 limit that is placed into this Trust will be disregarded for Medicaid application purposes. Thus, a person who has income greater than the limit may still qualify for Medicaid.

A single person may have no more that $2,000 of total assets. Most household goods and personal items are not counted. However, all bank accounts, brokerage accounts, real estate, retirement accounts, annuities, and life insurance policies (except term policies that have no cash value) are included.

A person’s home is generally not counted as an asset for Medicaid purposes, but the Medicaid regulations nonetheless place the house at risk. For an unmarried person, the house will remain exempt as long as the person can express “an intent to return home.” Basically, this means that if the person can sign a document stating that he desires to return to his home, the house will not be a countable asset. However, this exemption is not as generous as it appears. Because a Medicaid recipient may keep only $2,000 of assets, and must use all of his income to pay for his care, no funds are available to pay for the maintenance costs of the house, including real estate taxes, insurance, utilities, and repairs. Moreover, when the Medicaid recipient dies, the State of Ohio will seek to recover the money it spent on the individual’s care from the value of the house. Accordingly, most, if not all, of the value of the house will be surrendered to the State on the person’s death.

If the Medicaid recipient is married, the house will remain exempt as long as the healthy spouse resides there. However, the house may still be exposed to recovery by the State if appropriate legal steps are not taken.

Many people who are aware of the strict financial limitations of the Medicaid program believe   that they can establish eligibility by giving their home and assets to their children or other family members prior to applying for Medicaid. Unfortunately, giving away assets will result in the denial of Medicaid benefits for a period of time based upon the value of the assets transferred. The Medicaid regulations refer to gifting assets without receiving something of equal value in return as an “improper transfers.” When a person applies for Medicaid, the local Department of Job and Family Services will require the person to provide statements for all of their bank accounts, brokerage accounts, or other financial accounts for a period of five years. This five-year period is referred  to as the “look-back” period. The statements will be reviewed, and the Medicaid applicant will be required to explain any transactions that appear to be improper transfers. Any transactions that did not involve the purchase of legitimate goods and services will be deemed improper transfers and

In January of 2018, William suffers a stroke and moves to a nursing home. In March of 2018, William applies for Medicaid long-term care benefits. The local Department of Job and Family Services reviews his application and determines that William made the following improper transfers:

William’s penalty period will be 10 months. William is responsible for paying the full nursing home costs during those 10 months. On the 11th month after his application was approved, he will be eligible for Medicaid long-term care benefits, but will be required to pay the nursing home an extra amount that month to cover the fractional portion of the penalty period.

What can be done to plan for long-term care and ensure that a health crisis or chronic illness does not result in the impoverishment of your family? Although the financial restrictions of the Medicaid program are extremely burdensome, it is not necessary for a person to lose all of their savings. Planning can  be undertaken to preserve assets. Such planning however, is not simple. A careful analysis of each individual’s personal and financial situation must be done to formulate the proper plan. Factors such as income and investments; the nature and value of assets; the age of applicant; family situation; and other considerations must be carefully evaluated to make the right choices. Certain assets such as qualified retirement accounts (IRA’s and 401(k)’s) and tax-deferred annuities present special challenges because of the tax consequences resulting from their liquidation.

Joseph L. Motta Co. LPA has helped many families navigate the complex maze of Medicaid regulations and preserve a substantial portion of their assets. Set forth below are examples of two strategies that may be considered when seeking to protect assets. The first strategy is used when an individual or married couple believe that they will not require long-term care for at least five years. The goal of this strategy is to get certain assets out of a person’s name beyond the five-year look back period so those assets will not be countable for Medicaid purposes. The second strategy is implemented when a person is currently receiving long-term care and wants to apply for Medicaid while at the same time preserving as much of his or her assets as possible for family members.

Although a person who believes that he will not require long-term care in the next five years can attempt to protect his assets by simply giving them to his children, such an approach is fraught with risk. We must recognize that no matter how healthy we may seem today, there is no guarantee that we will remain in good health over the next five years. A traffic accident, a sudden stroke, or a fall down the stairs may cause chronic conditions requiring long-term care. Accordingly, any assets transferred for Medicaid planning purposes should be preserved so that they are available in the event long-term care becomes necessary prior to the expiration of the five-year look back. Assets given to children are often exposed to risk of loss. If a child gets divorced, his or her spouse may acquire a significant portion of the transferred assets in a divorce proceeding. A child may become a defendant in a lawsuit and the transferred assets used to satisfy a legal judgment. Additionally, a child may have poor financial management skills and spend the transferred assets inappropriately. For these reasons, assets should never be transferred to children directly when engaging in Medicaid planning.

The proper method of transferring assets involves the use of an Irrevocable Medicaid Asset Preservation Trust. Because the Trust is irrevocable, once assets are transferred they may not   be returned. Accordingly, the assets in the Trust will not be countable for Medicaid purposes after the expiration of the five-year look back period. The transferor’s children are the beneficiaries of the Trust, and one of the children is usually named as Trustee.  During the transferor’s lifetime,  the assets are preserved and protected so that if the transferor requires long-term care prior the expiration of the look back period, the Trustee can distribute funds to the children. The children can then use those funds to pay for their parent’s care.

Individuals often require long-term care without having engaged in any prior planning. They desire to apply for Medicaid, but have assets greatly in excess of the $2,000 limit, which they would like to preserve for their family. In such situations, it may be possible to save a significant portion of a person’s assets, while still allowing them to qualify for Medicaid. This requires dividing the individual’s assets into two shares: the “Gifted Share” and the “Medicaid-Compliant Annuity Share.” The Gifted Share is generally given to the individual’s children or to an irrevocable trust for their benefit. The Medicaid-Compliant Annuity Share is used to purchase a special annuity that is not counted as an asset for Medicaid purposes. The annuity produces a monthly stream of payments. The objective is to preserve the assets gifted to the children by using the Medicaid-Compliant Annuity to pay through the penalty period created by the improper transfer.

Leave a legacy, not a predicament. 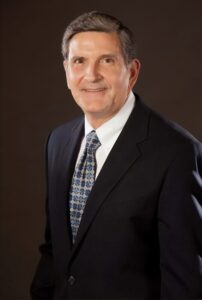 This guide is intended to provide you with a general introduction to Ohio’s Medicaid program. Please be aware that there are numerous details that cannot be covered in such a brief summary. Our goal is to educate you concerning Medicaid’s financial restrictions, and help you appreciate the importance of proper planning. Joseph L. Motta Co., LPA has helped many individuals qualify for Medicaid without losing their life savings. We want to provide you with the knowledge necessary to protect your family.

Joseph L. Motta Co., LPA is devoted to protecting families from life’s most challenging situations. Our goal is to provide you with the peace of mind that comes from knowing that you have planned your affairs so as to avoid the financial disruptions that often accompany death or incapacity. Each client receives our personal attention because we want you to feel comfortable discussing issues that can be emotionally difficult to address. We strive to use our knowledge and expertise to provide you with the best advice on how to protect the ones you love. Our primary office is located at: